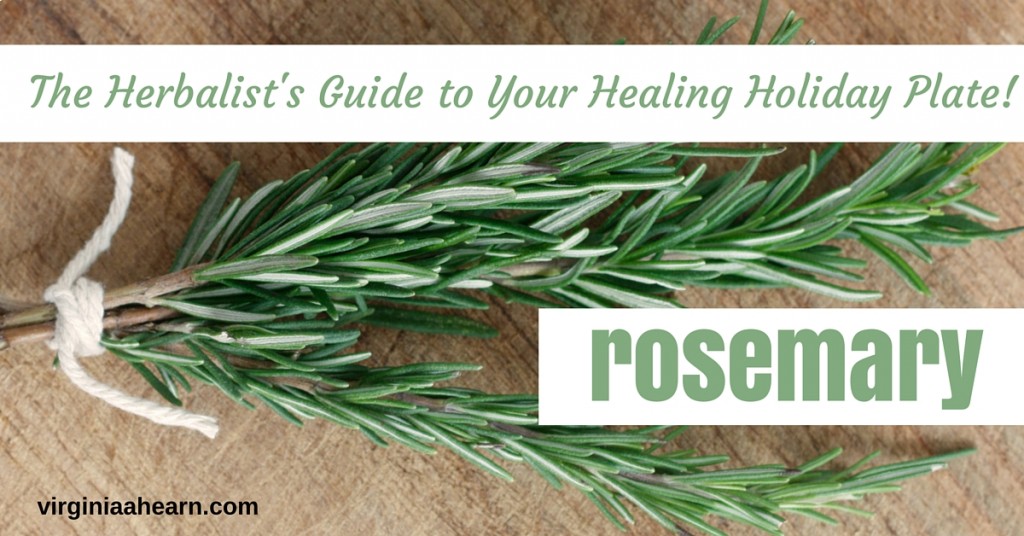 You probably know that rosemary goes great with roasted potatoes, but did you and is great for your liver, headaches, depression, brain fog, colds and flu, your memory and more?!

Yes, that delicious rosemary which is oh-so-good atop potatoes, squash and all manner of root vegetables is seriously good for you.

Rosemary has such a great smell when roasting in the oven, but by itself it has a strong flavor and can be quite bitter. This bitterness helps the liver process and digest food and fats, and can also help what is called a bilious headache, which is caused by impaired digestion of fats.

Our friend rosemary is great for brain fog, various types of depression, and even prevention of Alzheimer’s disease when taken in combination with other herbs.

Rosemary can be used as part of a protocol for spider veins, varicose veins, or atherosclerosis. If you’re interested in some of the chemical compounds, the flavonoid Diosmin found in Rosemary is more effective than Rutin for strengthening capillaries.

WOW! Can you believe there’s more?!

Rosemary is also anti-bacterial, anti-fungal, and anti-viral, making it useful during the cold and flu season. Plus it’s an anti-oxidant so it’s even a cancer fighting agent!

The leaves can be used either dried or fresh, or essential oil to do a steam for colds, and respiratory health such as bronchitis and bad coughs.

The tea is rather strong and bitter, so I prefer the tincture. The tincture still has a strong taste when mixed in water, but it’s so good for so many things that it’s easy to overlook.

For most of the above ailments and health issues it is best used in combination with other herbs, but don’t be afraid to experiment with it by itself. I suggest the tincture – start with ¼ to ½ teaspoon, several times a day.

Thank you Rosemary for being a culinary delight and a great medicine!

About the Author: Virginia Ahearn

"Virginia is a very knowledgeable herbalist. I learned a lot of great information in her class and we got to sample teas as well! It was well worth attending!